Homunculi and demons was a project exhibited at Arts Space Llotgeta in Valencia in 2006, and was, from the point of view of design and production, a change in my trajectory as far as it integrates text, images, and various other media different from the strictly pictorial media.

Homunculi and demons is developed around a original play, on which is based the imagery of the exhibition, reflected in paintings as drawings, sculptures and dioramas. The paintings show different moments of the work, the same as that the models and dioramas show the appearance of the stage and the sculptures show, in scale or in real size, the costume and props.

The play Homunculi and demons, based upon Daniel Dennett’s ideas, tries to show the incoherence of the called Cartesian Theatre, that is, the belief that there is a closed and finished version of reality that shows as if our mind is somehow a theatre and our consciousness a spectator.

The exhibition collects previous insights on identity from an approach close to cognitive sciences, dramatizing the debate on the nature of consciousness and materialism. In relation to the media, it meant the introduction of other media different from the pictorial support, in particular, dioramas in the form of boxes representing characters in indoor scenes, scale 1:12, and equipped with own lighting. This dioramas connected with the research carried out on pre-photographic devices and optical boxes later that resulted in the invention Dioramas with selective focus Viewer in 2014. 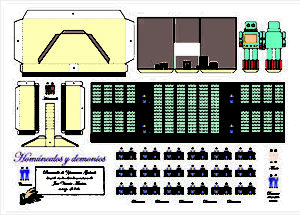 SUMMARY OF THE PLAY

The exhibition was about the homonymous, original drama that dealt with consciousness, identity and memory. The drama was influenced by the ideas of the philosopher Daniel Dennett and tried to show the incoherences of what Dennet calls the Cartesian theatre, this is, the belief that there is a closed and finished version of reality that is, somehow, shown as if our mind were a theatre and our consciousness a member of the audience. This hypothetical little self (as little as he or she might be inside our heads), sat in the audience, is the main character of the drama: Homunculus 1.

At the beginning of the action he leaves the stalls and goes on the stage, which has the appearance of a domestic environment, a house without walls where a bedroom, a living room… are placed. This familiar accommodation is a metaphor of our classic conception of mind: something comfortable and controllable. Nevertheless, Homunculus 1 starts to find out different clues that make him wonder if this everyday environment is hiding a secret. Old photographs kept in a drawer make him remember of past moments of his life when his opinions and beliefs were quite different from now. During this process of remembrance, an old version of himself comes out on the stage as an actual character, an alter ego: Identity 1997. They start to discuss about how their life has gone and ending up arguing bitterly and struggling until a couple of mysterious people appear on the stage and break up the brawl. And then the first act ends.

When the second act begins the scenery has changed. The walls of what was a comfortable home have been removed and a huge office is now on the stage. Homunculus 1 wakes up and an office worker who seems to be on charge explains to him what has happened. His scuffle with his past identity has somehow provoked that the comfortable appearance of his mind has changed to show what it really is: not a familiar place but a cold office ruled by office workers in uniforms: the cognitive demons. The Cognitive demon of common sense is the one who is in charge and he tries to explain that they, the cognitive demons, are the ones who really make the decisions, the ones who really decide what to remember, the ones that really decide what to believe in although he, Homunculus 1, believes that he is the one who makes all these decisions. The Cognitive demon of common sense also explains that he, Homunculus 1, is only one of the multiples identities that have had the delusion of being running that mind. According to that explanation, our opinions, beliefs, even our behaviour change so much during our life that it could be said that we are actually different persons at every single moment of our lives. Homunculus 1 and Identity 1997 are in fact different people.

Homunculus 1 does not want to believe these explanations and he discusses with the Cognitive demon of common sense about different situations that would prove that the impersonal, cold and automatic workings of mind is the “right” explanation. A huge toy robot illustrates what is behind all Homunculus 1’s fears: the actual possibility of not having free will, the fact that our decisions, desires, beliefs and personality might not be run by ourselves, even that our identity might not be something more than a cultural construction that does not have real consistency.

At the end of the drama, when Homunculus 1 is worried and sad about all the things he has heard, Identity 1997 appears again and convinces him that everything that has happened on the stage is just a dream and his comfortable idea of mind is right. Then he drives Homunculus 1 to a bed where he falls asleep. At that moment, Identity 1997 seizes to take the control of the situation, that is, to become the new main identity of that mind.

What the spectator has witnessed during the drama is the process of replacing one identity by another, the process of inner transformation that converts a person into another one. The process that questions what identity really is. Thereby, Homunculi and demons is a reflection about the instability of identity; about how it changes during our life, and about how its own essence is in doubt.